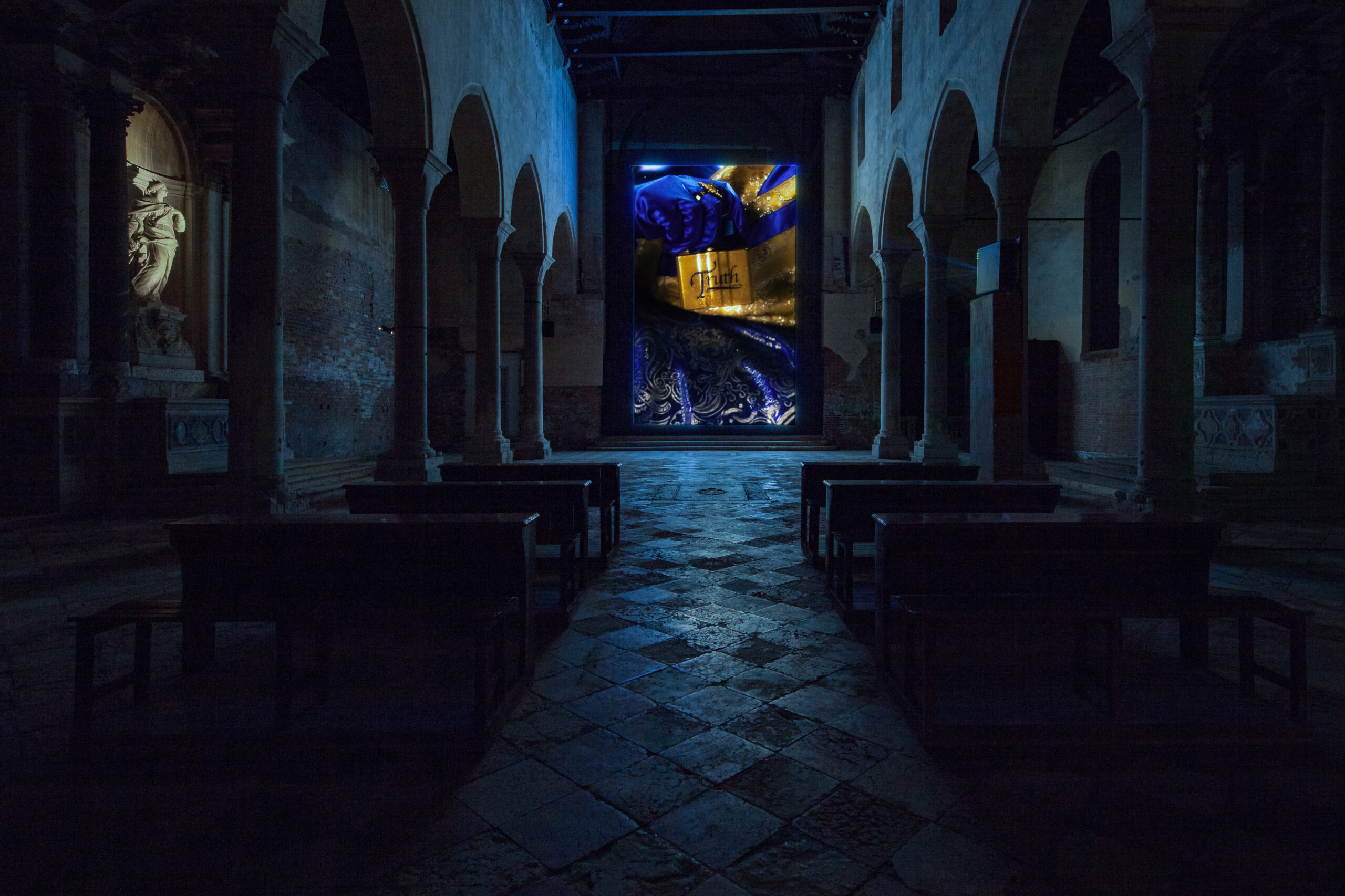 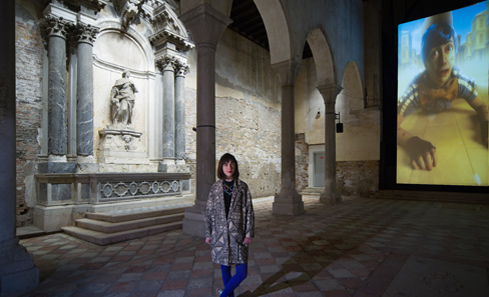 Curated by Alchemy Film and Arts, in partnership with Talbot Rice Gallery and the University of Edinburgh, Maclean’s modern-day, dark Venetian fairytale is presented as a large-scale portrait projection at the altar of the deconsecrated church, Chiesa di Santa Caterina, Cannaregio.

Referencing the Italian folk-tale The Adventures of Pinocchio, Maclean’s new commission offers a powerful critique of contemporary society, critiquing the underlying fears and desires that characterise the zeitgeist we find ourselves in today. Spite Your Face is a tale across two worlds – with a bright, glittering and ordered upper world, and a warped, dirty, impoverished lower world – where the lure of wealth, power and adoration entices a destitute young boy into the shimmering riches of the kingdom above.

“With this new film I set out to respond to significant changes in the political climate in the UK and abroad over the last 12 months – in particular the divisive campaigns in the lead up to the Brexit vote and the US Presidential election. These events have been central in heralding a new post-truth era, where politicians feel free to say what they want to help them gain popular support, with little regard for factual accuracy.

“The Venetian context also inspired my new work, drawing ideas and images from the city’s history. In particular, the architecture of the venue (a dramatic deconsecrated church) emphasises the topsy-turvy world depicted in the film, with the projection installed vertically in the alter space, rather than the traditional horizontal film format.

“This new Scotland + Venice commission is a darkly comic moral tale, depicting a post-truth dystopia where the world is turned on its head, leaving the characters untethered to any sense of right and wrong, truth and lies.”

The story, conveyed by a continuous film loop where the beginning seamlessly connects to the end, is told through the lives of two central characters, both acted and directed by Maclean: PIC, the central (English-speaking) protagonist who starts off as a young boy and grows to maturity during the film; and a Madonna-like figure (Italian-speaking, English subtitles) who embodies the moral compass. A third character – a manipulative salesman (also played by Maclean) – journeys with PIC through his moral corruption and corresponding rise to celebrity and power.

“Maclean is known for her bold originality and unflinching ability to satirise the economies of desire and wish fulfilment inherent in contemporary life. In this new film, she has turned her penetrating gaze to the nebulous question of truth, its relationship to current political discourse, greed and the will to power. It questions our fundamental desire for a better life, while asking which brand of truth we will choose in the pursuit of an ideal life.

“Maclean is an artist whose work speaks powerfully to our generation, with unsettling clarity and an uncanny astuteness, while reflecting Scotland’s own energised spirit of political reinvention.”

“The Scotland + Venice partners are delighted to be presenting Rachel Maclean’s remarkable new film work at this year’s Venice Biennale. Rachel possesses a unique and compelling vision and Venice offers a significant international platform for her work.

“Founded in 2003 the Scotland + Venice project continues to raise the profile of Scotland as a dynamic and evolving centre for the production, promotion and presentation of contemporary art. We are excited that this new commission will reach audiences from across the world and we look forward to welcoming visitors to the exhibition at the Chiesa di Santa Caterina from May to November 2017.”

In a unique partnership, the 2017 exhibitions for Scotland + Venice and Wales in Venice will both be shown in Scotland and Wales following their presentation at the 57th International Art Exhibition – La Biennale di Venezia. With support from Art Fund, Rachel Maclean: Spite Your Face will be exhibited at Talbot Rice Gallery, Edinburgh (February – April 2018) and at Chapter, Cardiff (October 2018 – January 2019); and James Richards: Music for the gift will be exhibited at Chapter (June – September 2018) and Collective, Edinburgh (January – March 2019).

The Exhibition Guide, with further details on Scotland + Venice’s presentation, can be found at the venue or downloaded here (PDF).

Based in Glasgow, Rachel Maclean (1987) was educated at Edinburgh College of Art where she completed her BA in Drawing and Painting in 2009. Rachel premiered a new commission, Again and Again and Again at Frieze Art Fair as part of Frieze Film 2016.

Maclean has risen to significant recent acclaim, with major, solo UK exhibitions Rachel Maclean: Wot u 🙂 about? at HOME, Manchester and Tate Britain, 2016-17. Maclean graduated in 2009 and her work came to public attention in New Contemporaries later that year. Since then, her work A Whole New World won the prestigious Margaret Tait Award in 2013, she has twice been shortlisted for the Jarman Award, and has achieved widespread critical praise for Feed Me (2016) in British Art Show 8. Web: www.rachelmaclean.com Twitter: @Maclean_Rachel

Scotland + Venice is a partnership between Creative Scotland, the National Galleries of Scotland and the British Council Scotland.

14 art students have been selected from six Scottish art colleges for the Scotland + Venice Professional Development Programme. Participants will spend 4 weeks in Venice sharing time between invigilation of the Scotland + Venice presentation and independent study and research. Meet the students here: https://scotlandandvenice.com/scotland-venice-partnership-announces-participants-in-the-2017-professional-development-programme/

Creative Scotland is the public body that supports the arts, screen and creative industries across all parts of Scotland on behalf of everyone who lives, works or visits here. We distribute funding provided by the Scottish Government and the National Lottery. Web: www.creativescotland.com Twitter: @creativescots Facebook: @CreativeScotland

British Council Scotland‘s mission is to build long-term international relationships and trust between the people of Scotland and other countries through the exchange of ideas, knowledge and information in the arts and education. Our involvement in the arts arena stretches back to 1947 when we helped to found the Edinburgh International Festival and every year we continue to work on new and exciting cultural projects connecting Scotland and the world. https://scotland.britishcouncil.org/

Talbot Rice is the University of Edinburgh’s public art gallery. As the project’s creative and academic partner, Talbot Rice Gallery will host Rachel Maclean’s work from the Venice Biennale in early 2018. Founded in the early 1970s, Talbot Rice has an influential national and international reputation founded on its exhibition and integrated education programmes. In the last decade the Gallery has curated exhibitions with some of the most influential artists in the world, including: Luc Tuymans, Jane and Louise Wilson, Joseph Kosuth, Jenny Holzer, Lucy McKenzie, Alasdair Gray, Mark Dion, Rosemarie Trockel, and Tim Rollins. Web: www.ed.ac.uk/talbot-rice Twitter: @talbotrice75 Facebook @talbotricegallery